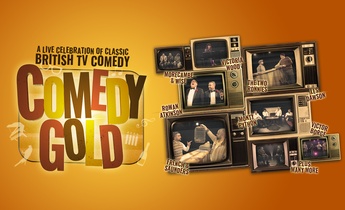 EVENT INFORMATION COMEDY GOLD vows to take you on a journey of humorous nostalgia; a riotous retelling ofthe greatest comedy sketches of all time, brought back to life by a cast of outstandingWest End performers. Featuring tributes to MONTY PYTHON, THE TWO RONNIES, MORECAMBE & WISE, VICTORIA WOOD, VICTOR BORGE, ROWAN ATKINSON and many more. Join us hand in hand as wewalk down memory lane in this laugh a minute masterpiece. Boasting an outstanding cast of actors holding extensive West End and InternationalTheatre, Television and Film Credits, the authenticity with which the material has beenrecreated is second to none. With a cast who know and love the sketches as much as theoriginal performers, they pay homage old school masterpieces with a warmth andaffection rarely seen on stage. Credits between the cast include Coronation Street, Casualty, Scott & Bailey, An Inspector Calls, Macbeth, Othello, High Society, Blood Brothers, Oliver, Matlda, Fame, Sweeney Todd andThe Sound of Music. With performances of legendary sketches such as FOUR CANDLES, MASTERMIND AND FOUR YORKSHIREMEN, we invite you to pull up a chair to the days gone by, when television waspure magic, and bear witness once again to some brilliant COMEDY GOLD. RUNNING TIMES 120 minutes, incl. interval. MEDIA #ComedyGold @WatersideArts

How to get to Waterside, Manchester