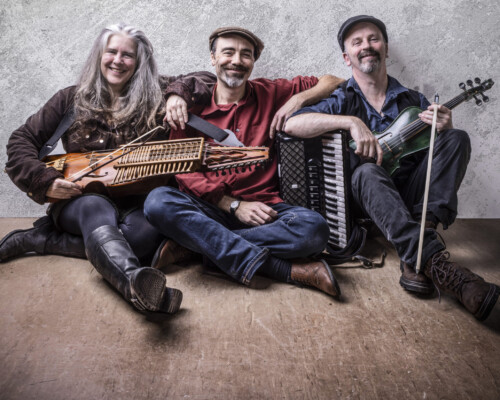 Firelight Trio is a mighty new group featuring accordionist Phil Alexander (Moishe?s Bagel), renowned Scottish fiddle player Gavin Marwick, and Ruth Morris on the beautiful Swedish Nyckelharpa.They play European music that is evocative, inventive, and endlessly exciting ? a rich tapestry of lively Swedish polskas and Scottish reels, lilting French waltzes, toe-tapping klezmer, and dazzling original tunes. The band will be performing material from their acclaimed debut album.The band members are:Ruth Morris: A versatile multi-instrumentalist based in Scotland, Ruth specialises in nyckelharpa, fiddle, whistle and piano. As well as Firelight Trio she currently plays with Gavin Marwick?s Journeyman Project, Bellevue Rendezvous, The Galloway Agreement, The Village and The Road, and her ceilidh band Whirligig. Most recent work includes being an on-set musician on HBO series Outlander, and playing nyckelharpa on the soundtrack of the Netflix film Outlaw King.Gavin Marwick: A fiddle player and composer from Edinburgh, Gavin has played at hundreds of festivals, concerts, theatres and dances across Europe, North America, Asia, Australia and Africa. As well as Firelight Trio he has worked with Journeyman project; Iron Horse; Cantrip; Up In The Air; Ceilidh Minogue; Whirligig; Bellevue Rendezvous; and The Galloway Agreement. He has composed for TV, radio and theatre: The Village and The Road (with Tom Pow and the Galloway Agreement); with the Traverse the music for Outlying Islands, Heritage and Faith Healer.Phil Alexander: Born in London, Phil studied at Goldsmiths College with John Tilbury, and has a PhD in Ethnomusicology. He is currently a British Academy Fellow at Edinburgh University, researching Jewish music in early twentieth-century Scotland. Besides leading Scotland?s top world-folk outfit Moishe?s Bagel, Phil has collaborated with a whole bunch of UK-based musicians, including the jazz tango trio Tangalgo, McFall?s Chamber, harpist Catriona McKay, folksingers Norma Waterson, Martin Carthy and their daughter Eliza, and many more. For several years he was a central part of the internationally-acclaimed Salsa Celtica, and his compositions have featured at London?s South Bank, Edinburgh?s Queen?s Hall and beyond.