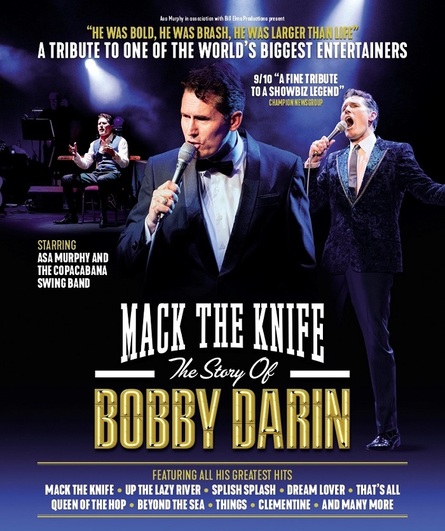 MACK THE KNIFE – THE STORY OF BOBBY DARIN

A musical tribute to one of the world's biggest entertainers and biographical look at the life of Walden Robert Cassotto, better known as the legend, that is Bobby Darin.

Born in East Harlem, New York in 1936 and from a background of hardship and serious illness, Bobby Darin battled to become one of the biggest stars of his era.

Starring Asa Murphy, the show is packed with all the Darin classic, backed by a live Copacabana Swing Band and Murphy's interpretation of what made Bobby Darin magic!

Featuring all his greatest hits, Mack The Knife, Up The Lazy River, Splish Splash, Dream Lover, That's All Queen Of The Hop, Beyond The Sea, Things, Clementine, and many more.

"HE WAS BOLD, HE WAS BRASH, HE WAS LARGER THAN LIFE”

How to get to the St Helens Theatre Royal, St Helens